And, this past year, to their teachers.

America’s educators have survived a rollicking year in the public spotlight — and no slowdown is in sight.

USA TODAY tracked the pressures on America’s teachers with a school-year-long series of stories, capped by a nationwide analysis of teacher pay and housing costs.

Starting last summer, it was front-line teachers rather than policymakers driving the national discussion over how best to educate children and compensate educators.

How the movement started: ‘Any talks of striking?’ A West Virginia teacher’s Facebook post started a national wave 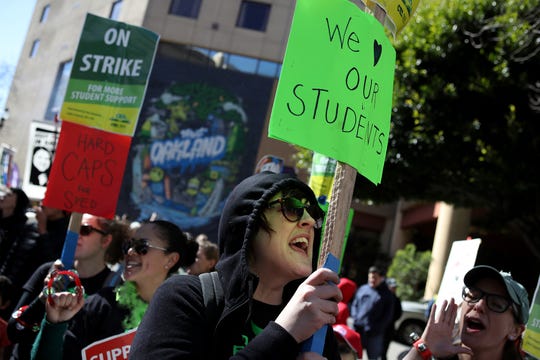 Teachers and parents in Oakland, California, march on the school headquarters during the teachers’ strike in February. (Photo: Justin Sullivan, Getty Images)

Their actions are helping to change the narrative. Red-state governors who cracked down on teachers unions a decade ago and trimmed education budgets are now adding money to education efforts. In Texas, state Gov. Greg Abbott, a Republican, just signed into law a $5 billion school finance package, with much of the money slated for teacher raises.

In Oklahoma, home to one of the first statewide teacher strikes in 2018, Republicans passed a budget that offers about $200 million in new education spending, partly to fund teacher raises.

On the Democratic side, presidential candidates Kamala Harris, a senator from California, and Joe Biden, former vice president, have both made pay raises for teachers part of their platforms.

In general, the public has backed the idea.

In a national poll from USA TODAY and Ipsos Public Affairs, a majority of people said teachers had the right to strike, a view held even by the parents whose lives were most disrupted when teachers walked off the job.

Teachers’ clout is new. A few years ago, they were resented

Many people were not feeling so generous toward teachers earlier this decade.

Around 2011, in the midst of a recession, many states slashed education budgets to close state budget gaps. Most of the efforts were led by Republicans, who gained seats in statehouses and governors’ mansions across the country during the 2010 midterm elections.

In Wisconsin and Ohio, Republican governors signed laws that dramatically limited collective bargaining, putting more power in the hands of district leaders to make decisions unilaterally and to adjust benefits to save money. While Ohio’s voters quickly overturned the law there, teachers who protested in Wisconsin often faced a public backlash, perhaps because so many other workers were suffering after the recession.

“I’m not sure when I became Public Enemy No. 1,” Ann Morrow, a former teacher in suburban Milwaukee, lamented in the midst of Wisconsin’s state budget fight in 2011.

As states continued to cut education money, superintendents found fewer efficiencies and starting cutting actual programs — even in wealthier suburban districts. Districts started holding more referendums or bond requests, not for new building projects but for money to keep the lights on. Others turned to four-day work weeks to save transportation costs.

Pressure from parents and district leaders eventually started changing minds in statehouses about the money needed for schools.

Plus, the economy got better.

“States are not in the same kind of budget squeezes they were in a decade ago,” said John Pitney, a politics professor at Claremont McKenna College and former research director for the Republican National Committee.

And, it turns out, the anti-union legislation of earlier this decade wasn’t completely directed at individual teachers.

“Republicans are in a difficult spot. On one hand, they and their base dislike teacher unions,” Pitney said. “But teachers are extremely popular with the public.”

Walkouts led to something else: Teachers running for office

Across the country in 2018, 1 in 4 races for a seat in a state legislature included an educator candidate. Most received support from progressive groups, funded by unions, that were determined to shift the balance of power.

The seats they picked up resulted in more of a scattered patchwork than a wave. But in the eyes of educators there were meaningful wins, such as for Jahana Hayes, Connecticut’s former teacher of the year who ran for Congress, and Tony Evers, a former teacher and state superintendent in Wisconsin who narrowly defeated former Republican Gov. Scott Walker. 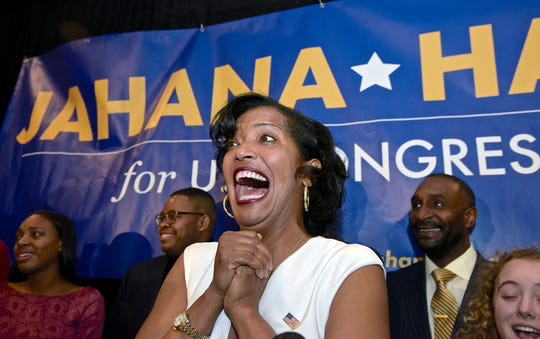 For one day in the fall of 2018, reporters from the USA TODAY NETWORK shadowed 15 teachers to document their lives and work.

Many of the 15 teachers, like Christine McFarland in Sinton, Texas, work side gigs to pay the bills. When readers met her last fall, McFarland was considering quitting her job as an elementary teacher. But she’s still there, teaching summer school and continuing to work a second job at a local grocery store.

“I continued teaching because I feel like that is what I am supposed to do,” she said when USA TODAY followed up with her this month. “I’m good at working with kids, and it’s my passion.”

Christine Kidd McFarland, a fifth grade teacher at Sinton Elementary School in Texas, said that she teaches because she enjoys working with children and she has a love of reading. But she works a second job to help make ends meet. (Photo: Rachel Denny Clow, Corpus Christi Caller-Times)

Then in January, teachers in the country’s second-largest school system, Los Angeles Unified, walked off the job. Teachers were looking for more than just a pay increase — they wanted more restrictions on charter schools, more nurses and smaller class sizes. And they got a lot of that, although after a ballot measure failed this month, it’s unclear how the district will pay for it.

Strikes spread in California … Why Oakland teachers walked out

… And elsewhere: ‘If they don’t pay us, shut it down!’ What to know about the Denver walkout

Charter schools are under pressure

Charter schools, now with a couple of decades’ experience, have come under increased scrutiny. The public schools are run by private entities and given some freedom from rules in exchange for showing higher academic performance.

Supporters say the schools are a vehicle for innovation, and some are better at serving low-income and minority students than traditional public schools. But much of the bipartisan support and corporate money behind charter schools has eroded, and a series of high-profile scandals have damaged the brand. 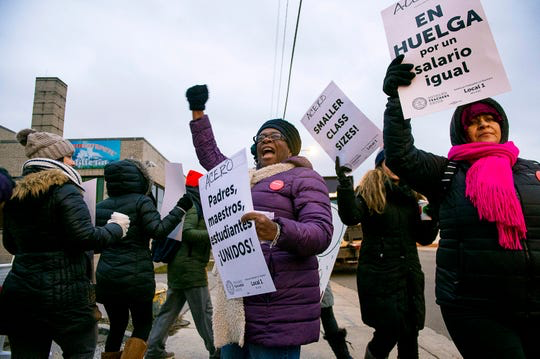 For decades, the training and credentials required for a teaching job guaranteed a middle-class paycheck and a dependable retirement. But that’s becoming less of a reality in some parts of the country, especially for young teachers entering the profession burdened with debt.

The happiest and most financially secure American teachers we found this year weren’t even in America: They were teaching abroad in private international schools, where they felt more respected. Many of the schools offer generous housing subsidies, which allowed teachers to keep more pay in their pockets.

USA TODAY also documented the myth of teaching in paradise for teachers in Hawaii, a state that experiences chronic teacher shortages when young graduates recruited from the mainland can’t afford to stay.

In fact, Honolulu emerged as one of the five most unaffordable cities for teachers in USA TODAY’s capstone analysis of teacher salaries compared with housing costs. 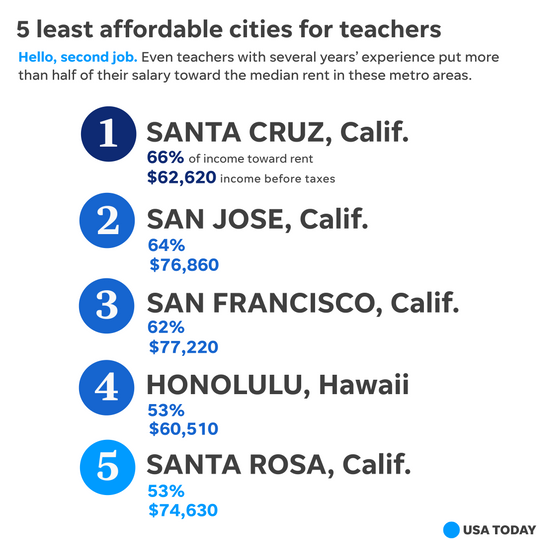 The other list: These are the best U.S. cities to live in on a teacher’s salary

Meanwhile, starting teachers can only afford the median rent in 13 metro areas, according to the USA TODAY analysis. The numbers showed that many teachers are still struggling in their jobs — despite the high-profile actions of strikes, walkouts and elections.

Has the public actually embraced teachers? It depends whom you ask

Alli Driessen, a Minnesota teacher who just finished her eighth year in the classroom, said she still doesn’t think people fully understand the plight of teachers.

“I don’t think enough has changed in the public ethos about education and teaching to fully implement the changes that our students need and deserve,” she said.

Even in progressive Minnesota, she said, the latest state budget doesn’t include enough money for schools to provide all the resources students need.

Jacob Rosecrants, a former Oklahoma City teacher who won a seat in the Statehouse in 2018, said something similar happened in Oklahoma.

“We invested more in our schools, but our (education) numbers are still around 2009 levels,” he said of the most recent budget. “We’ve gone from being out front with the walkouts to saying over and over: ‘There’s so much more work to do.’ “

And they’ll have to do it at a time when the public’s attention is as short — and fickle — as ever.