With barely two weeks until Election Day, outside political groups have spent more than $3.7 million attempting to sway the three competitive LAUSD board races. That total is slightly ahead of the pace set in the 2017 school board elections, which saw more outside spending than any other LAUSD primary in recent history.

Originally Published on February 14, 2020 By Kyle Stokes for LAist 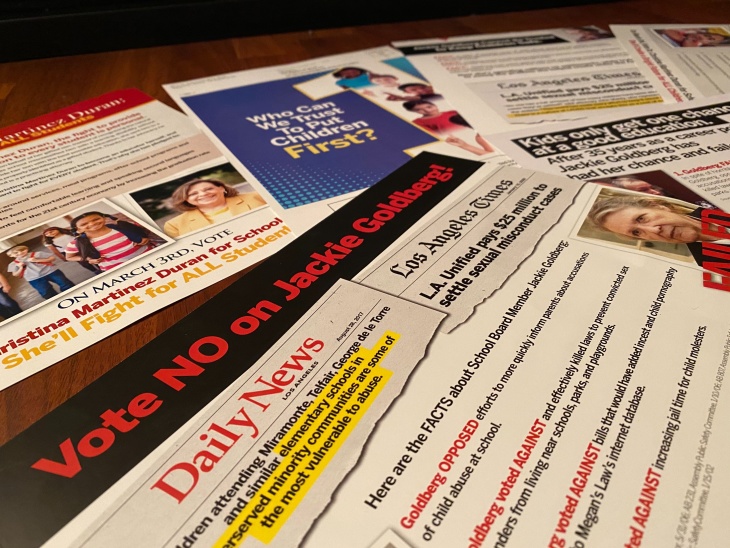 An array of mailers that have gone out ahead of the March 3 primary election for LAUSD board members. Once UTLA officials calls the anti-Jackie Goldberg mailers “race baiting.” (Kyle Stokes / LAist)

Los Angeles is home to the most consequential school board elections in the country. L.A. Unified is the largest school district in the U.S. with an elected board. Board members’ decisions touch the lives of 587,000 children.

On top of being important, L.A.’s school board elections have become expensive. Very expensive. In fact, if the current rate of spending continues, this March’s election will be the costliest LAUSD primary in history.

With barely two weeks until Election Day, outside political groups have spent more than $3.7 million attempting to sway the three competitive LAUSD board races. That total is slightly ahead of the pace set in the 2017 school board elections, which saw more outside spending than any other LAUSD primary in recent history. 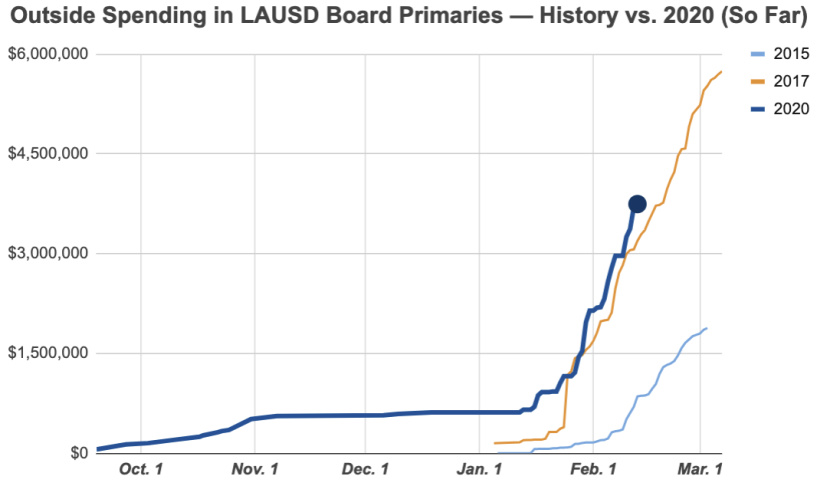 Here’s what that $3.7 million total reflects: whenever an outside political group spends money trying to sway an election — on mailers, advertising, or paid outreach like phone banking — they must report it as an “independent expenditure.”

Independent expenditures have come to dominate LAUSD races in recent years because outside political groups aren’t subject to the strict fundraising limits that candidates face in school board races. (Thanks, Citizens United.) Plus, unlike in L.A. City Council elections, LAUSD candidates aren’t eligible for matching funds.

There’s a familiar storyline behind all of this spending: two rival factions with contrasting views on education policy — charter school advocates and L.A.’s main teachers union — are vying for control of the LAUSD board.

WHY ARE CHARTER GROUPS SPENDING SO MUCH MONEY?

For the schools represented by the California Charter Schools Association (CCSA), the stakes of the LAUSD election are high. In California, charter schools often need the permission of their district’s school board in order to open — and in July, a new law will take effect giving school boards more discretion to block new charters from opening.

“The challenge is we have an organization — the teachers union — that’s interested in closing down high-quality schools,” said Gregory McGinity, executive director of the charter association’s political arm, CCSA Advocates. “We just don’t see how that’s good for families and communities.”

CCSA is also looking to bounce back from almost two years of disappointments. In 2018, former LAUSD board president Ref Rodriguez resigned, breaking up a loose majority of CCSA-endorsed members on the board. CCSA then sat out the special election held to replace Rodriguez, and watched as an outspoken charter school critic, Jackie Goldberg, won the right to fill out Rodriguez’s term.

Bloomfield’s $1.5 million in independent expenditures — much of which is going against Goldberg — makes him the largest single source of outside spending in the LAUSD primary so far, according to a KPCC/LAist analysis of campaign finance figures. 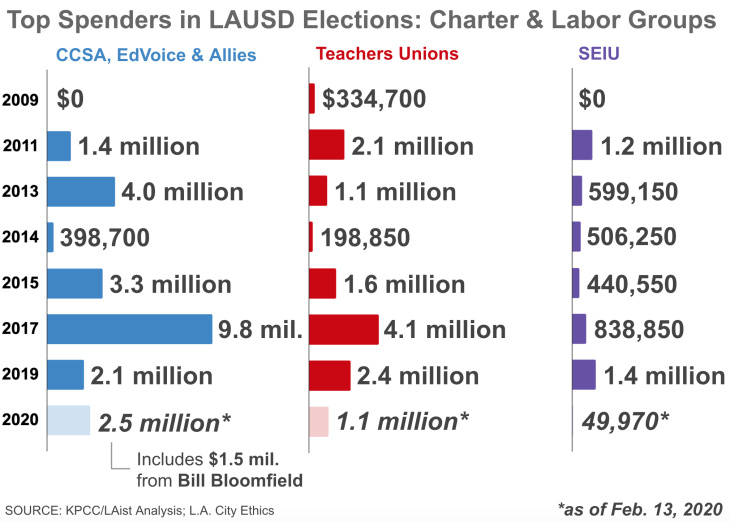 WHY ARE TEACHERS UNIONS SPENDING SO MUCH MONEY?

For United Teachers Los Angeles, this pro-charter spending underscores the importance of the election.

Ingrid Gunnell, chair of UTLA‘s political action committee, acknowledged the union is a traditional power in LAUSD politics — but she said its power comes from 13,000 union members pooling small-dollar donations, rather than deep-pocketed philanthropists.

“This is public knowledge: we don’t have unlimited funds,” said Gunnell. “We don’t have people like Eli Broad, Bill Bloomfield, Richard Riordan, writing a $100,000 check the night before the election.”

In the union’s view, a “friendly” school board could act as a buffer against the influence of pro-charter groups, and help the 30,000-member union — which represents LAUSD teachers, nurses, counselors and others — pursue its own goals.

“If we had a friendly, consistent school board, we probably wouldn’t have had to go out on strike,” said Gunnell.

Before the strike, Gunnell said UTLA had two reliable allies on the board. Even after Goldberg took office following the strike, UTLA says they’re still one vote short of a solid majority — termed-out incumbent Richard Vladovic, who’s received both UTLA and CCSA endorsements in the past, is a swing vote.

In short: for UTLA, a majority bloc on the board is at stake in March.

WHERE ARE THE UNION AND CHARTER FORCES SPENDING MOST?

In the three competitive races, CCSA only endorsed one candidate: Marilyn Koziatek, who’s challenging incumbent Scott Schmerelson in the race for the Board District 3 seat.

But in races where the charter association declined to endorse, ally Bill Bloomfield has been actively spending. In Board District 5, he’s spent almost $950,000 attempting to unseat Goldberg.

Many of the mailers Bloomfield’s purchased criticize Goldberg for concerns that date back to the 1980s, issues that came up during her first stint as a LAUSD school board member. In an email, UTLA executive director Jeff Good characterized Bloomfield’s anti-Goldberg mailers as “race-baiting.”

The 1985 L.A. Times story cited to back up this statement covers a racially-fraught dispute over school attendance boundaries. The story doesn’t mention Goldberg’s name, though — and in a message to supporters, Goldberg said she didn’t represent the area where this dispute took place. (The board vote on the change in question was unanimous.)

In a message to supporters, Goldberg called them “bald-faced lies.” When asked to respond, Bloomfield stood by the claims in his ads.

“Every single statement,” he wrote in a letter, “in the mail we’ve supported has been factual and thoroughly researched and fact-checked.” He also said, “LAUSD does not work well for low-income communities, especially Latino and African American children,” and that he believed Martinez Duran is “the kind of person this district and its diverse families deserve.”

But CCSA has outspent UTLA in BD3 by a two-to-one margin. The charter association has spent more than $489,000 to boost Koziatek’s candidacy, and another $472,000 on negative ads against Schmerelson.

The teachers union has also spent around $430,000 supporting longtime labor activist Patricia Castellanos in BD7, one of five candidates seeking to replace the termed-out Vladovic.

CCSA didn’t endorse a candidate in the BD7 primary, but here again, Bloomfield has stepped up. He has chipped in $580,000 to support two candidates — Tanya Ortiz Franklin and Mike Lansing — perhaps in a bid to force Castellanos out of the likely runoff between the top two finishers.

HOW WILL THIS ELECTION PLAY OUT?

In recent years, LAUSD races have played out in odd-numbered years in low-turnout elections. But this year, LAUSD elections are on the same ballot as California’s presidential primary, meaning school board election turnout will certainly be higher.

Both UTLA and CCSA theorize the alignment with a high-visibility election helps their side. CCSA’s McGinity says polling data shows public support for charter schools, but that this broader sentiment wasn’t always reflected in low-turnout election. Is he right?

“There’s all kinds of possibilities,” said Raphael Sonenshein, the executive director of the Pat Brown Institute for Public Affairs at Cal State L.A. “We haven’t had an experiment with this in L.A. yet, and this is going to be it.”

Still, Sonenshein’s inclined to believe UTLA’s contention — that the Democratic presidential primary is likely to draw more progressive voters who are interested in supporting traditional labor powers. He says it’s even possible the presidential candidates themselves may weigh in on the school board debate.

In previous years, that runoff would’ve taken place only two months later. This year, failing to win without a runoff means a long slog to November.

“The big gap between March and November is a problem for everybody,” Sonenshein said. “It’s the biggest flaw in this reform.”

Mail-in ballots have already been sent — and voters can begin casting ballots in-person as early as Feb. 22.