“They threw rocks at a wasp’s nest” 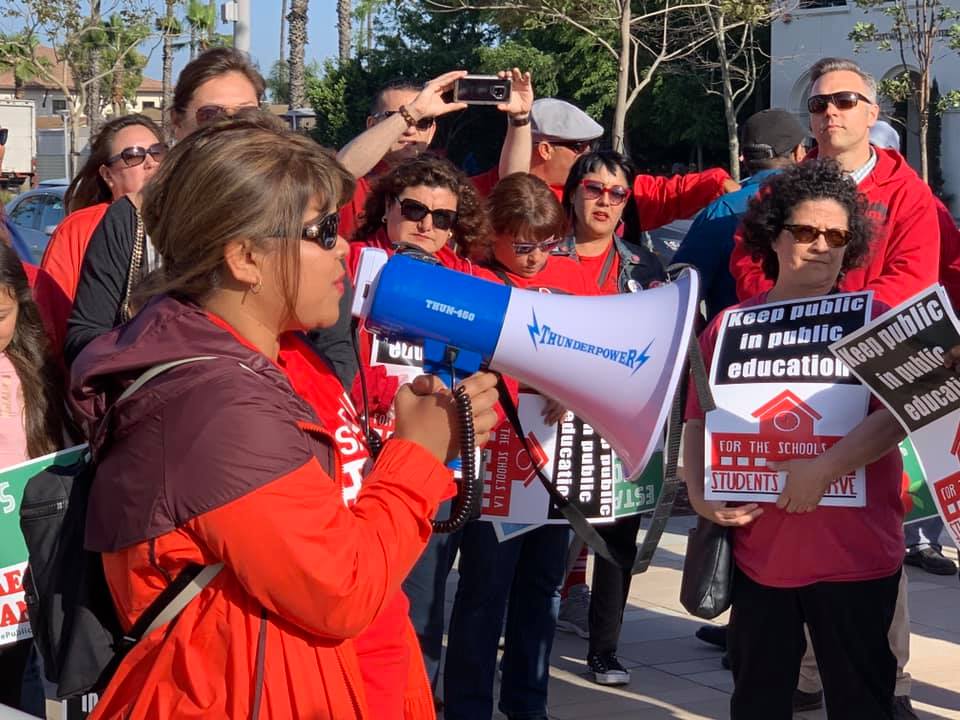 Widespread opposition to a charter company moving onto campus has sparked a fierce push-back from Catskill Elementary in Carson. Just as UTLA was heading into our strike, the Catskill community got wind that GANAS charter corporation had been offered space on their campus, threatening the well-rounded programs the school has built for their students.

“When they targeted our school, they threw rocks at a wasp’s nest,” says teacher Elizabeth Untalan. “You don’t do that to a community school. Our school is 71 yearsold—older than the city of Carson. We’re a legacy school—grandparents, great-grandparents, sons, daughters have all gone through our doors.”

Co-location is allowed under Prop. 39, the flawed state law that can force neighborhood public schools to give away “unused” space, which is defined as a room that does not have a roll-carrying teacher assigned to it. In reality, that unused space is usually not unused at all. At Catskill, it houses three computer labs, a counseling room, a parent volunteer center, and an art studio—resources the school had built to better serve the students from their low-income community.

The Catskill community—educators, parents, and community activists—united behind the fight and started organizing, helped by the communication structures and spirit of working together that had been built during the UTLA strike.

Catskill’s fight has been bolstered by support from neighboring schools in San Pedro, Wilmington, Harbor City, and Lomita and from labor allies, including the International Longshore and Warehouse Union, in the union-strong Harbor Area.

“When we show up, we show up as a family,” Untalan says.

The community has embraced every tactic in the toolbox—social media outreach, petition drives, lobbying at city council meetings, and rallies outside Carson City Hall. News conferences amplified the concerns of parents like Jose Carrazo, who doesn’t want his child’s education disrupted by co-location.

“This school is thriving,” Carrazo said. “Do not put my daughter or any Catskill student in the middle of this ploy to undermine the teachers and the Catskill community.”

The community has proven it can bring the heat at a moment’s notice. When GANAS held an emergency board meeting to vote to officially co-locate, Catskill mobilized more than 60 people, who raised issues with the GANAS co-location petition and demanded to know why the charter leaders had called law enforcement on two separate occasions to try to prevent Catskill parents from speaking. GANAS did not offer answers and abruptly ended their meeting by walking away. The charter company has until May 1 to accept or reject the space at Catskill.

Catskill special education teacher Amanda Crane says the lack of transparency and accountability shows that GANAS is a bad fit for the community.

“They are coming in from outside, have not lived or worked in this community, nor made an honest effort to address our community’s concerns,” Crane said.

For GANAS to survive on the Catskill campus, it has been aggressively recruiting students from the surrounding community. When charter companies want to co-locate, they get parents to sign “intent to enroll” forms, often employing dubious marketing strategies and misrepresentations of the neighborhood public school. These “intent to enroll” forms are used by the charter corporation to justify projected attendance numbers and qualify it for the maximum number of classrooms at the public school. Whether those parents who signed the intent forms are truly interested in sending their children to the charter school is a different matter, and because of these over-inflated enrollment numbers, the charter often is granted space it doesn’t use.

“One of the terrible ironies of the corporate charter industry is that our communities are already oversaturated with charters, but the privatizers keep pushing to open more,” UTLA President Alex Caputo-Pearl said. “Co-location is a tactic of the California Charter Schools Association and its billionaire benefactors who push a ‘win at any cost’ business model.They don’t care if a local school is harmed as long as charter corporations get more classroom seats.”

By undermining the academic programat the neighborhood school, co-location plays into the privatization game plan. The loss of dance rooms, computer labs and other great programs makes the local school less attractive to parents, who may try to enroll their kids elsewhere. If a school then struggles, the privatizers can label it as failing, shut it down, and turn it over to a private operator.

Our recent contract made progress in addressing co-location abuses by requiring notification of schools threatened by co-location, which gives schools more opportunity to push back. The agreement also creates a new elected UTLA co-location coordinator position, requiring the coordinator’s input in the development of the Shared-Use Agreement and ensuring the coordinator ’s appointment to the School Safety Committee. UTLA and parents are pushing for more, including legislation for a moratorium on charter expansion in the state.