In a huge initial victory, LAUSD is withdrawing its motion on Student-Centered Funding from consideration at today’s School Board meeting.

Your calls and emails and the vibrant community rallies at Monroe High and Dorsey High worked — the damage SCF would do to our schools was put front and center, and School Board members noticed.

Our work continues. Privatizing forces in the district will bring back Student-Centered Funding, and we will continue to fight this internal voucher scheme that would pit schools against each other, drain resources from many high-needs schools, and lead to cuts in programs.

“The withdrawal of the SCF motion is a powerful win for public education,” UTLA President Cecily Myart-Cruz says. “We have won this round and set ourselves up strongly for the rest of the fight and for going on the offense for authentic equity and all the resources and supports our students deserve.” 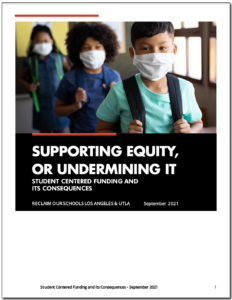 Using figures from an LA Unified-created analysis, a new report by UTLA and Reclaim Our Schools LA shows that SCF would undermine existing LAUSD equity initiatives and trigger funding loss at a swath of LAUSD schools.

Monroe High stands to lose $1.2 million in funding for students each year if the district converts its budgeting to SCF. Other alarming numbers in the report from the LA Unified analysis:

Get more information about Student-Centered Funding ➡︎ “What is SCF?”