Fueled by a new package of charter-focused bills, parents, students, and educators have been meeting with lawmakers in Sacramento and Los Angeles to press for a moratorium on charter expansion and for common-sense accountability and oversight for the corporate charter industry. 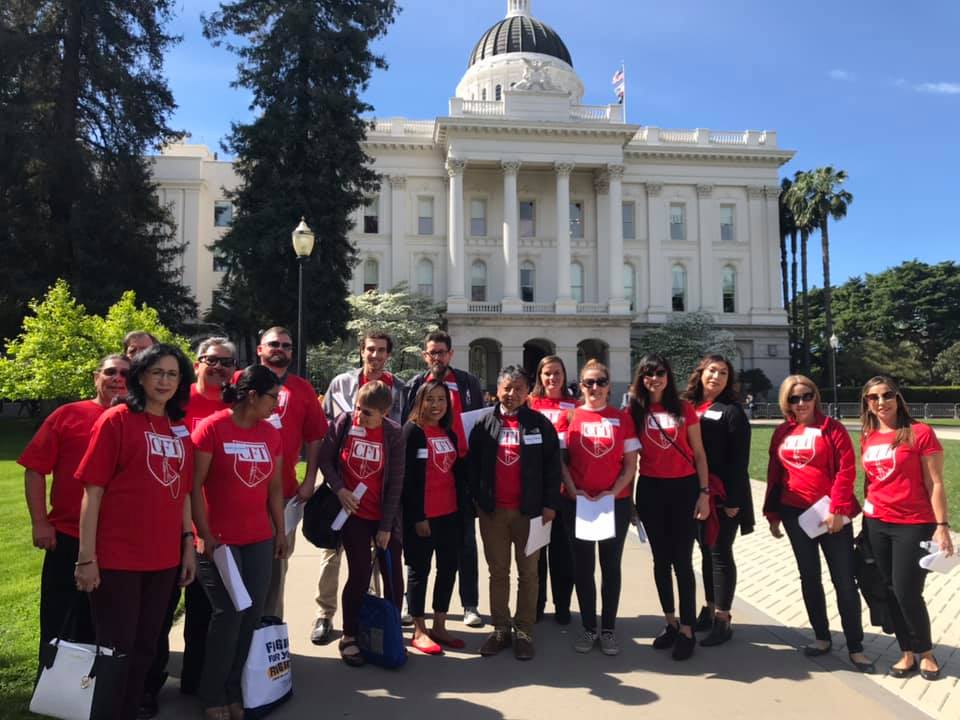 Fourteen parents and students from Eastside Padres Contra La Privatizacion joined a lobby and action day on April 9 organized by ACCE and the Housing Now CA Coalition to talk with legislators about housing and education bills. The parent team visited nine legislators—four from the education committee—and had frank discussions about how public schools are being financially strangled by the uncontrolled growth of the corporate charter industry, driven by billionaire privatizers and the California Charter Schools Association.

“We told our stories about co-location and how important a charter moratorium is to our community,” parent Julie Regalado said. “For the most part, we got really good feedback, especially from the people on the Assembly Education Committee. They listened carefully as parents and students talked about the issues with co-location and the chaos that goes on, which many of them didn’t know about.”

UTLA members have been lobbying both in legislators’ local offices and in Sacramento, where they joined the CFT Lobby Day on April 10.

“Our strike lifted up the issue of privatization and the unregulated growth of charters that aren’t held accountable to the same laws that govern our public schools,” said Ingrid Gunnell, UTLA’s political action chair and board member. “We carried that message to our meetings with legislators, so that they know parents, educators, and community members are demanding changes to decades-old laws that have allowed the charter industry to divert millions away from public schools and have permitted waste, fraud, and abuse of taxpayer dollars at the expense of our students.”

SB 756 by State Senator Maria Elena Durazo would enact a four-year moratorium on new charters and require analysis of critical issues, such as the impact of co-locations on students and whether charter operators serve similar numbers of English learners and pupils with disabilities as public schools.

AB 1505 by Assemblymembers Patrick O’Donnell and Rob Bonta would give control back to local elected school boards to decide whether a charter school is the right fit for their communities, instead of unelected officials who might be several hundred miles away. Local district officials would be able to consider the fiscal impact of the charter when authorizing it. This is especially critical for school districts like LAUSD, where the unchecked growth of charters drains more than $600 million from neighborhood public schools.

AB 1506 by Assemblymember Kevin McCarty would establish a cap on the growth of charter schools, limiting the destabilizing impact of the unchecked charter expansion pushed by privatizers and the corporate charter lobby.

AB 1507 by Assemblymember Christy Smith would close a loophole in current law that allows a charter school to operate outside of its authorizing district. These bills follow the swift passage in March of Senate Bill 126, which requires charter school boards to comply with the same open meeting and conflict-of-interest laws as district school boards and ensures board members don’t have a financial interest in contracts on which they vote.

Take action: If you are interested in joining delegations to visit the local offices of legislators who are undecided or opposed to these bills, email charterbills@utla.net. Provide your home address, and we may be able to match you with a legislator who represents your area.