California is the richest state in the nation, yet ranks 43 out of 50 states in per-pupil funding. LAUSD must fight at the local, state, and national level to increase funding to $20,000 per student by 2020.

My son Myles is a special needs student, and I have fought to find the right fit for him since he was in kindergarten. Not all schools have been able to properly support his education. I had to move him from five different schools to get the support that he needed. Now he’s safe, happy, and doing well in a day class for special education students at a school that is close to our home in South LA. Myles has great teachers, especially his special education teachers, who keep in touch with me about his individual support plan. Parents shouldn’t have to send their children to five different schools to find one that meets their needs. Every school should be supporting all children. The more support they have now, the better they will be in the long run, and I want my son to have a good life.

‘We will strike for our students’ 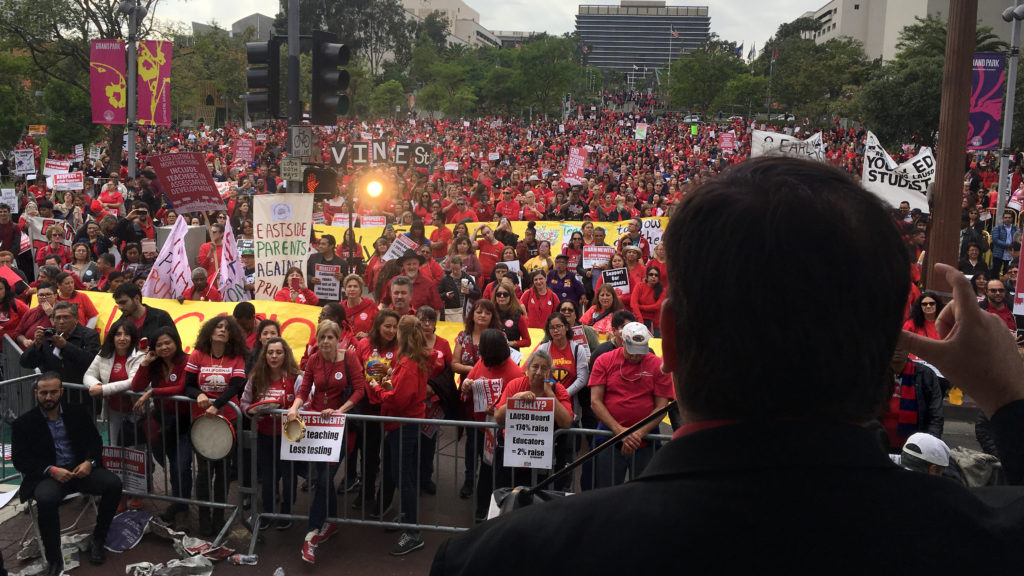 A strike is not something we take lightly. If we are forced to strike, it will be as a last resort after almost two years of fruitless contract negotiations and allegations of unlawful behavior from our employer, the Los Angeles Unified School District.

We will engage in whatever talks are possible to avoid a strike, but the district must be willing to spend from its record-breaking $1.9 billion in reserves to support our students, and must engage our full package of proposals rather than dismiss them.

We know there are tough decisions ahead for the more than 600,000 students and their families impacted by a strike. While every family will make their own decision on whether to send their child to school in the event of a strike, having many parents and allies on picket lines will be powerful and transformative.

For many years, the district has been starving our schools of necessary resources and prioritizing the unregulated growth of the charter industry over our neighborhood public schools. Superintendent Austin Beutner is doing this right now as he has contracted with firms that have advanced privatization in other cities. Meanwhile more than 80% of LAUSD schools don’t have a full-time school nurse. There is only one counselor for every 945 students. LAUSD has among the highest class sizes in California. Overtesting of our students is crowding out instruction in arts, music, ethnic studies, and science. California ranks 43 out of 50 in per-pupil funding, yet the district refuses to use its more than healthy reserves to immediately fund our classrooms.

Making progress on these issues is the only way we can provide all students, not just some, with the schools they deserve.

If LAUSD fails to engage meaningfully in our proposals and we are forced to strike, we will strike for our students.

The money to fund the education of students is there. We just need to get it to students.

At the local level, instead of hiding hundreds of millions of dollars per year in an unaccounted-for books and supplies slush fund, LAUSD should get that money to classrooms. Moreover, LAUSD currently has a $1.86 billion unrestricted reserve. The state requires districts to have a 1% reserve, yet LAUSD is holding onto 26.5% of its money in reserve. As the chart below shows, every year for the last five years, LAUSD has projected a financial disaster three years into the future. Yet, the disaster never comes, and the district ends up with hundreds of millions, even billions, in reserve. With these monies available at the local level, there is no “rainy day” to wait for—conditions in classrooms show that the need is here now, and our students deserve the support now.

At the state level, California is the fifth-largest economy in the world and boasts a Gross Domestic Product (GDP) of $2.7 trillion, the highest of any US state.1 Yet, by almost every significant measure, California ranks near the bottom in the nation in funding for public education. While states like New York spend nearly $19,000 per pupil annually, California lags far behind, significantly below the national average of $12,526.2 To address this state-level crisis, LAUSD must work with parents, communities, and unions to create more revenue at the state level for public education. We need to increase per-pupil funding to at least $20,000 by the year 2020. Last year, the LAUSD School Board voted unanimously in support of a resolution calling for a dramatic increase in per-pupil funding to meet this goal.3 The superintendent and School Board must make this more than rhetoric, and use their connections to billionaires and elected officials across the state to fight tooth-and-nail for increased revenue.

To this end, the superintendent and School Board should immediately and vigorously take leadership in the following:

Under current tax law, income gained by private equity firms and hedge fund managers, known as carried interest, is treated as capital gains, which are taxed at a lower rate than regular taxpayer income.4 Legislation to close this tax loophole would generate close to $1 billion annually in revenue for public schools and other critical social services for California. Right now, LAUSD should find a sponsor and build a campaign for state legisla- tion to close this loophole in the upcoming legislative session. This loophole has unfairly benefited many businesspeople in the same industry as the superintendent, and he should use his connections to correct that and fund our schools.

Under current tax law, there is a loophole allowing an avoidance of inheritance tax on high-end vacation and rental homes. Further, the purchase of high-end business services (such as management consulting) is not taxed, and many luxury items, such as yachts, are undertaxed. Right now, for the upcoming legislative session, LAUSD should find sponsors and build campaigns for state legislation that would close the inheritance tax loophole, enact taxes on high-end business services, and fairly tax luxury items, such as yachts.