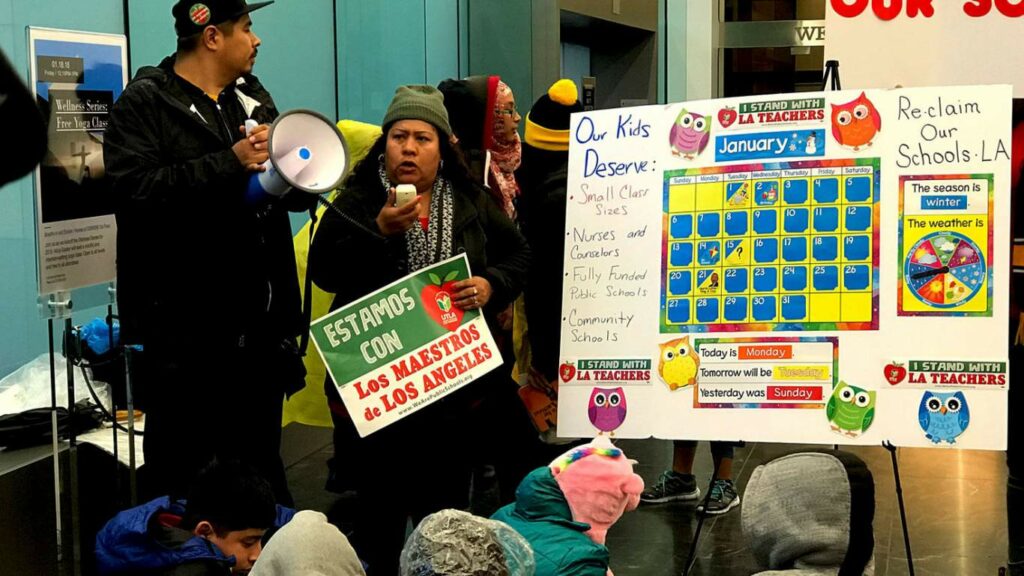 Above, on the first day of our strike, parents and community members (Maria Osorio on the mic, with ACCE organizer Cesar Castrejon) with Reclaim Our Schools LA stage a “teach-in” at the offices of Oaktree Capital Management to protest unchecked charter industry growth.

Amid the sea of red shirts that flooded Los Angeles in early January, it may have been easy to miss those worn by the members of Eastside Padres Contra La Privatización. An all-volunteer organization formed in 2017 in response to a planned KIPP charter co-location at Marianna Avenue Elementary, Eastside Padres is a leading force in the community struggle to defend public education.

On the Friday night before the strike began, these parents and about 50 others, as well as a number of students, gathered in a crowded room on the ninth floor of the UTLA building. These were ordinary people who knew they were a part of something big. Yet that something wasn’t abstract. Each was there for a very personal reason. All seemed to conclude that they could only address those immediate concerns together, by pursuing something larger. It felt like old-fashioned solidarity at its purest.

The group, which appeared perfectly representative of the city’s demographics, had assembled to figure out strike support. How they were going to do that was an open question, but what they were fighting for hardly needed to be discussed. Mother after high schooler after grandparent raised hands to offer versions of the same answer: to defend public education, to demand increased state funding, and to fight privatization.

As educators organized for better teaching and learning conditions, they were joined by thousands of parents in the fight for the schools our students deserve. Throughout the strike parents organized direct actions at key spots around the city. #CommunityStrong #UTLAStrong

They soon moved on to developing a plan, an important step since few among them had much if any activist experience. For the first week, they agreed to start each day on their neighborhood picket lines and to devote the afternoons to participating in workshops on the larger issues at stake in the struggle — racial justice, corporate power in education — and preparing for a series of direct actions targeting the forces behind the privatization agenda: from storming the offices of the private equity firm Oaktree Capital Management, whose senior executives bankroll the charter movement, to demonstrating outside the homes of charter-backed school board members like Monica Garcia and Superintendent Austin Beutner.

The next weekend, five days into the strike, they went back to the drawing board to figure out how to escalate their campaign the following week. They had some big plans, but scrapped them in favor of a celebration once UTLA announced its settlement on the morning after Martin Luther King Day.

All of this was dynamic, but none of it was spontaneous. That first Friday meeting had been organized by Reclaim Our Schools Los Angeles (ROSLA), a UTLA-supported coalition of community organizations like Students Deserve, the Alliance of Californians for Community Empowerment (ACCE), the Los Angeles Alliance for a New Economy (LAANE), Clergy and Laity United for Economic Justice (CLUE), and various labor unions.

Over the past five years, ROSLA, together with UTLA’s parent organizers, has done the slow, rarely glamorous work of training parents and students about the threat of privatization and preparing them to take that message back into their communities.

A key issue around which they organized was community schools, recognizing parents and students’ deep desire to have a voice in overseeing their schools. And that effort paid dividends. The groundswell of community support for the strike grew out of the investment parents and students had in the issues at stake.
Eastside Padres member Jazmin Garcia explained to me why they decided to go all in on this effort.

And Garcia was clear that the strike was only one phase.

“Hopefully this strike re-energized people and made people aware who weren’t before,” Garcia says. “But Padres is going to keep on fighting because the privatizers aren’t going to stop, and if we don’t continue, public education will be eliminated little by little.”

Ten years ago, this kind of thing would have seemed unthinkable. From top to bottom, the Democratic Party was at that time committed to an idea of education reform that saw the problems with public school systems as starting and ending with bad teachers. The Obama administration’s Race to the Top program, overseen by Secretary of Education Arne Duncan, proceeded from the same kind of market idolatry that inspired George W. Bush’s No Child Left Behind — that struggling schools simply needed incentives to improve. 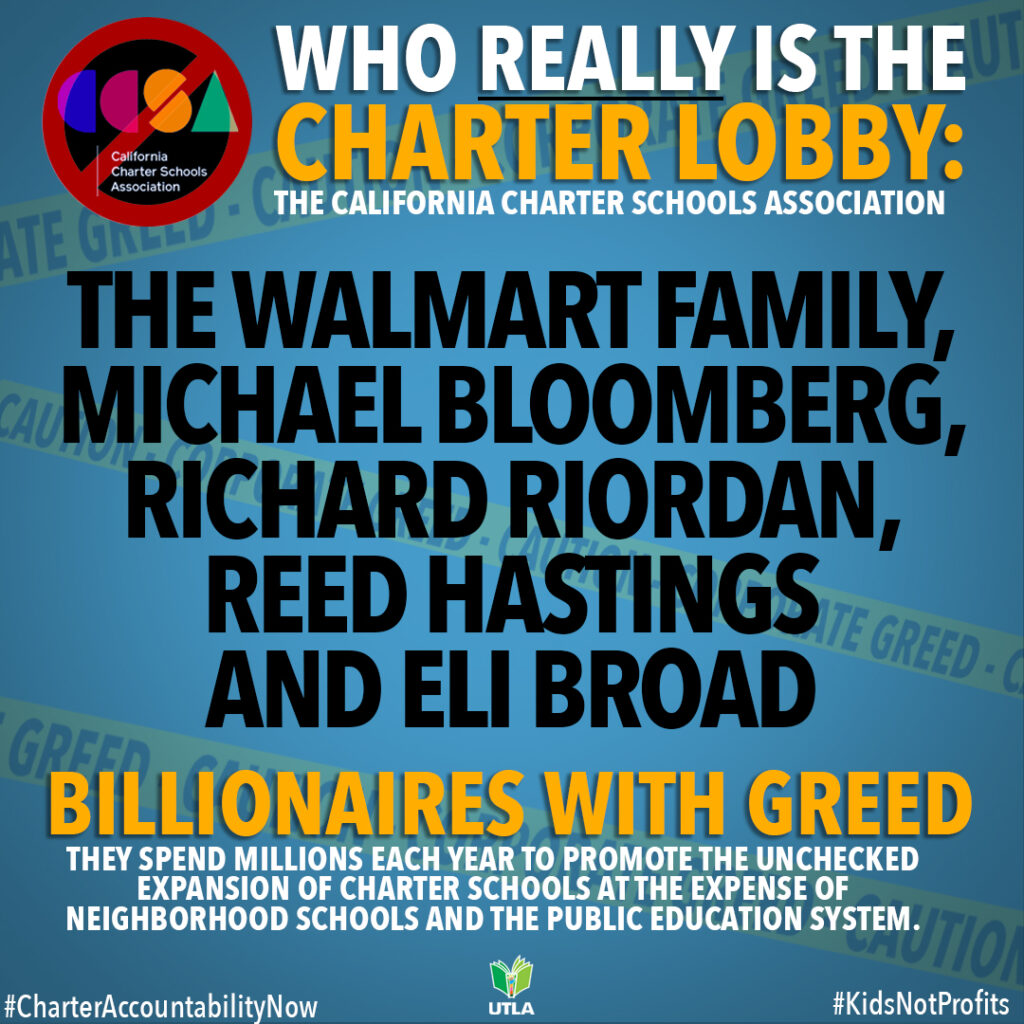 “Choice,” “innovation,” and “performance” were the watchwords of the day, and charter expansion the solution. Hit pieces like the documentary Waiting for Superman shaped the liberal imagination of what was wrong and what was to be done, while droves of well-intentioned young people hoping to do their part flocked to Teach for America. The full-blown commodification of public education seemed upon us.

The educators who have taken to the streets over the past year have stopped that attack in its tracks. The LAUSD Board, which just two years ago charter interests spent almost $10 million to monopolize, voted a week after the strike in favor of a moratorium on charter expansion while the state completes a study on the charter industry’s impact. A strong advocate of public education, Tony Thurmond, is now State Superintendent of Public Instruction. And Governor Gavin Newsom is supporting legislation to hold charter schools to the same standards as the rest of the public system. In California, at least, defenders of public education now control the narrative and the privatizers are on the defensive.

Still, there’s a long way to go. Above all, we have to confront the underlying economic reality of chronic school underfunding in California: the fifth-largest economy in the world spent less per-pupil than 41 US states on the day the Los Angeles strike began, and they spent that much the day it ended. It will require major action to address this fiscal problem, such as closing the corporate loopholes of Proposition 13, the 1978 law that has effectively prevented the California public from reaping any benefit from galloping real-estate values. One can only imagine what the corporate class will bring to that fight.

But if the road ahead is long, at least we now know where we’re going and how to get there: through a popular working-class movement advancing a vision that connects the futures of public school students to a well-funded, high-quality public education system.

“It gives me so much pride to know that the kids and parents from my community are leading this struggle,” Garcia told me the day her daughter returned to school. That sense of ownership and the empowerment that comes with it are the source of this movement’s strength.