Neighborhood Public Schools Forced to Give Up Space to Charter Schools 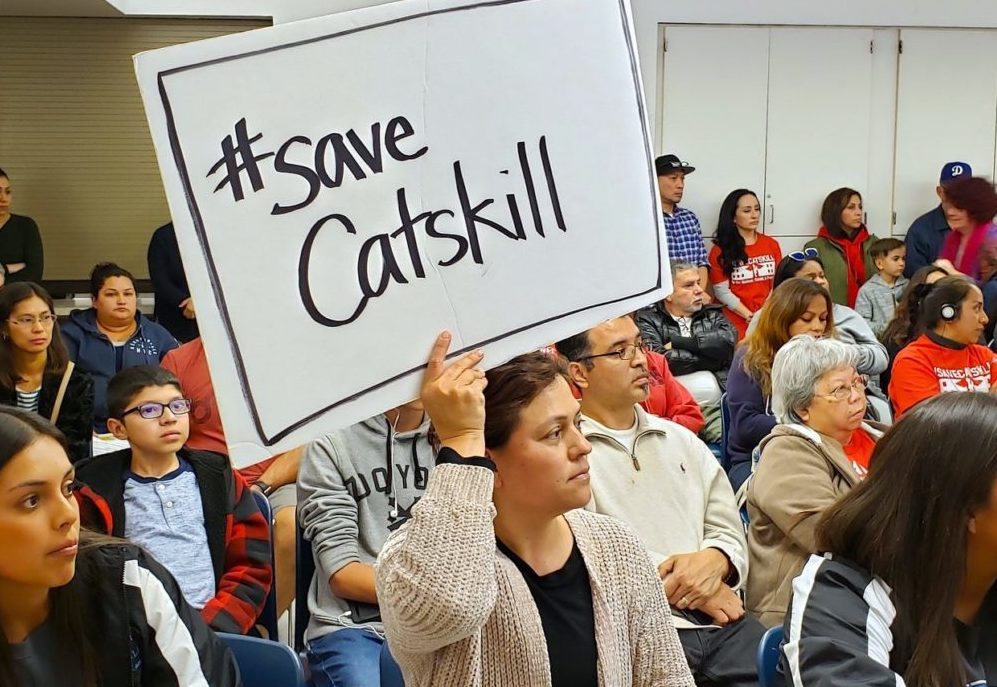 “It’s been around for 71 years….Grandparents, great-grandparents, daughters son have all gone through our doors.”

But Untalan and many of her colleagues and neighborhood parents are worried. They believe Catskill’s deep standing in the community is endangered by the possibility that it may soon be sharing its building with the new Ganas Academy Charter School.

This is called “co-location,” one of the more unfamiliar practices behind the sector’s dramatic expansion in California. (As of 2017-18, charter schools serve almost 630,000 students in the state.)

In Los Angeles alone, more than 70 public schools have seen valuable learning and collaborative spaces appropriated by charter companies for their staff and students. Co-locations also exist or have been approved in San Francisco, Oakland, San Diego, and the state’s Central Valley area. The same trend has been underway in Chicago and New York.

If the co-location with Ganas goes into effect, students at Catskill could lose their library, computer lab, parent center, and rooms for counseling.

“How bad could it get? Some of the schools special education students and their instructors will lose their classroom and be forced to move into a closet.”

United Teachers Los Angeles (UTLA) is mobilizing its 33,000 members and parents in opposition, but Ganas is pushing ahead, undeterred by concerns over how the co-location will impact Catskill’s 522 students. Thirty percent  are English language learners and 90 percent are federally subsidized under the U.S. Department of Education’s Title I program.

Howard Elementary in Oakland also serves a similar high-needs student population who rely on the school’s well-rounded services and facilities. Howard already shares mobile classrooms with the Francophone Charter School. But starting this fall, Francophone is moving into the main building, displacing Howard teachers and students.

How bad could it get? Some of the schools special education students and their instructors will lose their classrooms and be forced to move into a closet.

In April, Howard teacher Yael Freidman urged the Francophone board not to select their space, saying it would bring  “a catastrophic disruption” to the school.

“Just because something is legal does not make it ethical,” Friedman said. “It is unethical to force teachers of special needs students to work in subpar conditions. It is unethical to further marginalize children of color by denying them adequate space to learn.”

Charter schools are usually situated in buildings or facilities owned by an entity other than the school district, or in buildings formerly owned by the district. Virtual charter schools, of course, depend on little if any physical classroom space.

Still, in order to expand, for-profit charter companies want more access to facilities. Fortunately for them, many politicians and laws have compelled the district to provide it.

Co-location in California was teed up by Proposition 39, a school-funding ballot initiative adopted by voters in 2000. Embedded in the law is a provision that requires districts to offer charter schools “reasonably equivalent … facilities that will sufficiently accommodate all of the charter’s in-district students.”

If a space or room in a public school is not a classroom used by a teacher, it may be deemed “unused” – and therefore up for grabs for a charter company that requests it.

If a space or room in a public school is not a classroom used by a teacher, it may be deemed “unused” – and therefore up for grabs for a charter company that requests it.

“Co-location is a tactic of the California Charter Schools Association and its billionaire benefactors who push a ‘win at any cost’ business model. They don’t care if a local school is harmed as long as charter corporations get more classroom seats.” – Alex Caputo-Pearl, UTLA president.

In some instances, where there is genuine underutilization of space in a neighborhood public school, co-location may be minimally disruptive. The Center for Reinventing Public Education, a charter-friendly research organization, concluded in 2015 that – theoretically at least – public schools and charters school could “coexist peacefully” under certain conditions. It also added that “leveraging co-location for school improvement isn’t easy.”

How it’s being carried out in most communities, however, is typical of the the charter industry’s focus on competition with neighborhood public schools, while operating without adequate transparency or accountability.

As a result, co-location proposals usually create tension and division in communities, and not just in California. In New York City, charter schools are allowed to operate in public buildings at no cost, a policy started under Mayor Michael Bloomberg. A charter advocacy group and the city’s Education Department have publicly clashed over widely differing claims about just how much city owned space is available to co-locate charter schools in Brooklyn.

Setting aside the hazards of wedging two distinct school “cultures” together under the same roof, co-location can be devastating for schools already struggling with scarce resources.

Antonia Montez is a veteran teacher at Eastman School in East Los Angeles, which has been co-located since 2016 by the Extera charter company. When the school arrived on campus, the students’ art room, STEAM lab, parent center, garden programs, and food bank were all impacted, she says.

“We already have an innovative school that provides numerous opportunities for our students during and after the school day,” Montez explains. “We don’t see why Extera should be here. They’re not providing anything innovative or different from what our public school or our community already has.”

‘You Are Predatory and Aggressive’

While co-location may fall a little more under-the-radar than other privatization initiatives, charter companies have been aggressively pursuing the tactic to solidify and expand their presence.

Indeed, in order to survive on the Catskill campus, Ganas has been aggressively recruiting students from Catskill and the surrounding community. If a Catskill student leaves to go to Ganas, the public dollars would go with the student to the charter school, leaving the public school with less funds and fewer resources.

“Co-location helps fuel the decades-long strategy of the privatizers, including the charter lobby, of starving public schools of funds, using misguided ‘accountability’ policies to label them as failures, and pitching privatization as the answer,” says NEA senior policy analyst Bob Tate.

Fortunately, a growing number of educators see what is happening. Curtailing school privatization – specifically the expansion of unaccountable, for-profit charter schools – has been a pillar of the RedforEd movement. Recent city-wide strikes in Los Angelesand Oakland helped drive support for the state legislature’s recent actions restricting the charter sector.

Co-location is when a charter company takes learning space from a neighborhood public school—usually against the wishes of the local teachers and parents. Parents and community members from Marina Del Rey MS in LA are organizing against this resource theft. #WeArePublicSchools pic.twitter.com/EaXmpf12sn

Carrying over the momentum from their strikes, UTLA and the Oakland Education Association have led the charge against co-location, collaborating with parents and community groups  to expose how the practice depletes valuable resources from their most vulnerable students.

Catskill educators and parents have demanded answers from the Ganas charter corporation on why they are pushing head against the clear the wishes of the community. “You are predatory and aggressive” teacher Christina Gan told a Ganas board meeting in April, which was announced only one day in advance after two and-a-half months of refusing to hold any public meetings.

Despite a LAUSD spokesman’s insistence that the decision to co-locate Catskill was designed to “minimize disruptions and potential impacts,” stripping critical resources and services from their students will do precisely the opposite, says Catskills teacher Chris Collins.

“Co-location is nothing good for us. It will only hurt our school and our students are going to suffer. They already know that there may not be an art teacher next year because there won’t be a room for him.”