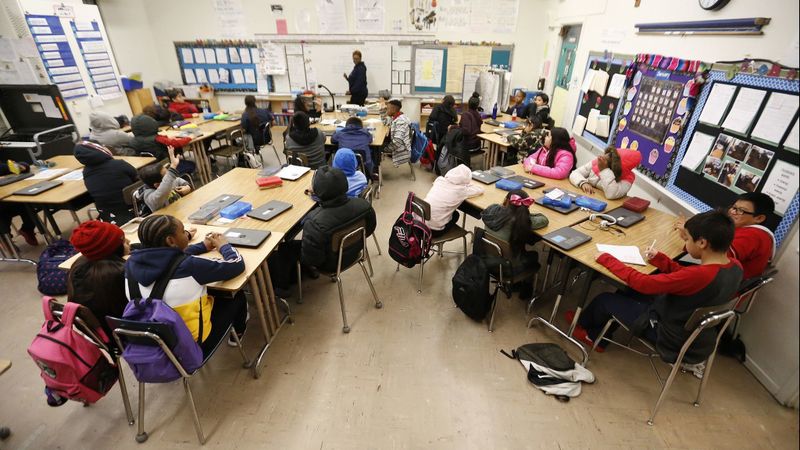 By THE TIMES EDITORIAL BOARD

Los Angeles schools, by contrast, spent $13,230. According to figures from the school district, that number is now up to about $16,000.

The explanation for this glaring discrepancy among the districts obviously isn’t that Los Angeles students have fewer needs. Nor is it about the cost of living, which is actually lower in Boston than in L.A. The reason for the difference is that California routinely underfunds its public schools. When the cost of living is factored in, California consistently ranks among the bottom 10 states in per-pupil expenditures.

In recent years, the state has increased its spending, and the Los Angeles Unified School District has been a major beneficiary of this, with extra dollars flowing to help the district’s many disadvantaged students. But the money still falls dramatically short of what’s needed. The district faces an annual structural budget deficit that has raised the specter of bankruptcy in the next few years. There are far too few counselors and nurses in the schools, class sizes are large, buildings and grounds often aren’t kept up, and school libraries are often shuttered. None of this is a recipe for improved learning, better test scores or higher rates of college attendance in a district overwhelmingly made up of low-income students of color.

L.A. Unified has little or no chance of offering an excellent education to its 600,000 students without more resources.

That’s why voters urgently need to approve Measure EE, which would raise about $500 million a year, or about $750 per student, by instituting a new parcel tax on residential and commercial property throughout the school district.

There are legitimate concerns being raised about the measure — including how effectively the district will spend the new money, whether the proposed oversight mechanisms are strict enough, and even about which structures will be taxed at the proposed rate of 16 cents per square foot. What’s more, the measure has been hurried onto the ballot in a June 4 special election that will almost certainly draw dismayingly few voters. The crafting of the language and the setting of priorities moved at a pace that was faster than ideal.

These aren’t trivial objections, but overriding them is one clear truth that even opponents of the tax don’t deny: L.A. Unified has little or no chance of offering an excellent education to its 600,000 students without more resources, no matter how efficiently it shepherds its budget. Indeed, four months after a bitter weeklong teachers’ strike, L.A. schools Supt. Austin Beutner, teachers union leader Alex Caputo-Pearl and Mayor Eric Garcetti are all campaigning together for support of the parcel tax, arguing that the district can’t fulfill its responsibilities if it is chronically underfunded.

If passed, the bulk of the money raised by Measure EE would be spent, officials say, on new hires, as required under the district’s new contract with United Teachers Los Angeles. By the end of three years, the plan is to reduce class sizes by an average of four students, place a full-time nurse at every school, hire dozens of counselors, and increase library services at every school.

But single-family homes would account for only about 20% of the total revenue. Commercial, industrial and institutional landowners would pay the lion’s share, which is a major reason various business organizations are vehemently against the measure. Landlords of apartment buildings also would be significant contributors and might pass that expense along to renters in non-rent-controlled buildings. The tax would sunset in 12 years.

A late-in-the-game change in the wording of the measure caused a bit of a stir about exactly which structures would be taxed, and a lawsuit already has been filed claiming that this change was too significant to be allowed without a vote of the L.A. Unified Board of Education. The contention revolves around whether the tax covers only “habitable” space, such as the living quarters of a house, or whether it also includes structures such as garages. The change had removed the word “habitable.”

Obviously, there’s no way to know what the outcome of the lawsuit will be. But the school board says that the change was intended only to clarify that commercial space was to be included. The board has made it abundantly clear that it has no intention of taxing garages.

Opponents also complain about the flexibility built into the measure. They note that the board wouldn’t have to spend every parcel-tax penny on the stated priorities, such as counselors, smaller class sizes and nurses (except where necessary to meet the demands of the new three-year union contract). Rather, the money could be spent in a variety of ways, subject to the approval of the school board. Our view is that that’s how it should be: The district needs the flexibility to respond to new information and new situations.

Reduced class sizes, for instance, are immensely popular with parents, but the evidence on their usefulness is mixed. Will it make a real difference in student learning if there are four fewer students in most classes? That remains to be seen — and if turns out to be of little value, it shouldn’t be continued once the union contract is ended.

Our bigger concern is that L.A. Unified has generally been remiss when it comes to measuring its own programs and progress. What works? What doesn’t? The district starts new initiatives with too little evidence of their effectiveness, and then often fails to evaluate them to see which ones should be ended and which ones expanded.

If voters approve Measure EE, they will be placing a great deal of trust in school district leaders. Finally given enough money to bring much-needed healthcare, counseling and other services to students, those leaders will have to empower and heed the new oversight board that is to be appointed, and to invite outside evaluation by independent experts. The passage of Measure EE would not in any way reduce the imperative to do away with administrative bloat and to cut the healthcare costs that are threatening the fiscal condition of the district. Both are needed for the district to flourish.

And the board must be unafraid to use the new revenues to do what will work best for students. If top-notch training of teachers would work better than slightly reduced class sizes and at reduced cost — and some experts think it would — the board must be ready to change course.

But before the district can do all the right things with adequate funding, it first has to have adequate funding. And Measure EE would go a long way toward bringing L.A. Unified to that point.

‪East LA moms are fed up with the charter company invasion at their school. Here they shut down the board meeting of #Exteracharter company that is encroaching on their public school. Charters use co-location and harm our kids by taking away needed resources. #ResistProp39‬ #Kipp #pucschools #exterapublicschools #HandsOffOurSchools

You stood by us when we went on strike for six days in January, and we stand by you TODAY in your STRIKE and ongoing fight for job security, higher wages and an end to privatization! #UCfortheMany #Strike4Equality #UPTEStrong #3299Strong #UnionStrong #EducationForAll #UTLA @UPTECWA and @AFSCMELocal3299

Beutner tells media that during a strike that computers will take care of our kids. Say what!?!? #TeachersMatter #StrikeReady #UTLAstrong••••Correction: The voice in the audio belongs to KCRW reporter Jenny Hamel as it aired on Madeleine Brand’s show. Also as you can hear in the audio, the quote continues and does not stop at the period.