If You Supported the Teachers’ Strike, You Can’t Reject the Parcel Tax That Will Pay for Its Demands 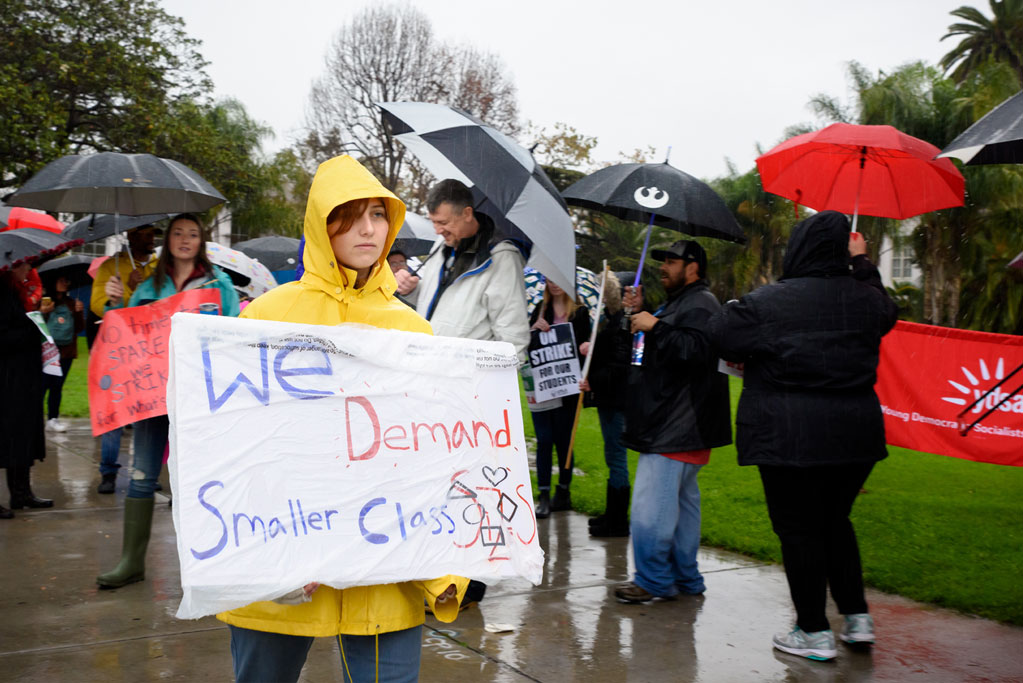 Overwhelming public support for the LAUSD teachers’ strike in January — nearly 80% of L.A. County residents, according to an LMU Center for the Study of Los Angeles poll — heralded a renewal of community interest in L.A. public education. It was an historic moment of collective agreement that our public schools have been chronically underfunded, cheating students out of reasonable class sizes and access to librarians, nurses and counselors.

If you supported the strike, Tuesday’s single-issue election to decide LAUSD parcel tax Measure EE demands you put your money where your mouth is. The $500 million it would raise over each of the next 12 years is basically the amount LAUSD will need to fulfill the new teachers’ contract that came out of the strike without bankrupting the district in as little as three years.

If Measure EE fails, structural deficits could force the kind of drastic education cuts we saw during the recession. Parcel tax opponents who advocate starving the district into much-needed reforms ignore two harsh realities: 1) about 730,000 kids would suffer in the process; 2) the core problem is demographics — there are fewer school-age children in Los Angeles amid a surge in employee benefit costs as the Baby Boomer generation heads into retirement.

To address concerns about LAUSD’s past fiscal stewardship, Measure EE proceeds would be kept in a separate account and spending would be audited by an independent oversight committee. Proportionate to enrollment, about 20% of the funding would go to LAUSD charter schools (a boon for many Westchester families in particular).

At 16 cents per square foot of development, the owner of a 1,500-square-foot home would pay just under $240 per year. That’s no small commitment, but still a fraction of what many property owners would be paying without Proposition 13 protections that restrict funding for public schools (why California ranks 41st out of 50 states in per-pupil education spending), and a fraction of Measure EE’s burden on commercial properties (well into the six figures for a downtown office tower, for example).

Unfortunately, Measure EE needs two-thirds voter support to pass — which is highly unlikely, given that most voters don’t have school-age children and that many charter school parents don’t trust the district.

“A lot of the parents are on the fence because they wonder if the money will be spent efficiently, but it doesn’t change the fact that we have so little funding in the first place. Parents already spend so much money and time fundraising for what should be basics,” said Haan-Fawn Chau, whose two kids attend WISH Charter Elementary School in Westchester.

Chau grew up in New York, which spends almost twice as much per student. Her public middle school had its own planetarium.

Kirsten Miller, whose son attends the Mandarin Immersion program at Braddock Elementary School in Del Rey, hopes that proceeds of Measure EE will finally bring a full-time nurse to campus. Last year her son hit his head at school and was sent home with a note warning Miller to keep watch for concussion symptoms — there wasn’t a nurse around to examine him.

“I’m not expecting a windfall,” said Miller. “I just agree with what they were asking for during the strike.”

Jenny Hontz is a Westchester mom and spokeswoman for the grassroots parent organization Speak UP, which is campaigning to pass Measure EE.

“Westside parents raise a ton of money for our kids’ schools because we know public education is underfunded in L.A., and we know our kids deserve more. But that creates a huge equity chasm. Most families in L.A. live in poverty and simply cannot raise the money to make up for inadequate state funding,” Hontz said. “We absolutely believe we need reform, but the people who might say ‘Let LAUSD fail’ to try to force those reforms are gambling with the lives of kids who need the money right now.”

Nick Melvoin, who represents the Westside on the LAUSD board, has been a leading advocate for confronting union leadership to reduce employee healthcare and pension liabilities. He’s also a huge supporter of Measure EE.

“The city was so enraptured by the teachers’ strike that now we have to honor our commitments,” Melvoin said. “The collateral damage of not doing so would be the children.”

Joe Piasecki is managing editor of The Argonaut. Agree or disagree via letters@argonautnews.com.