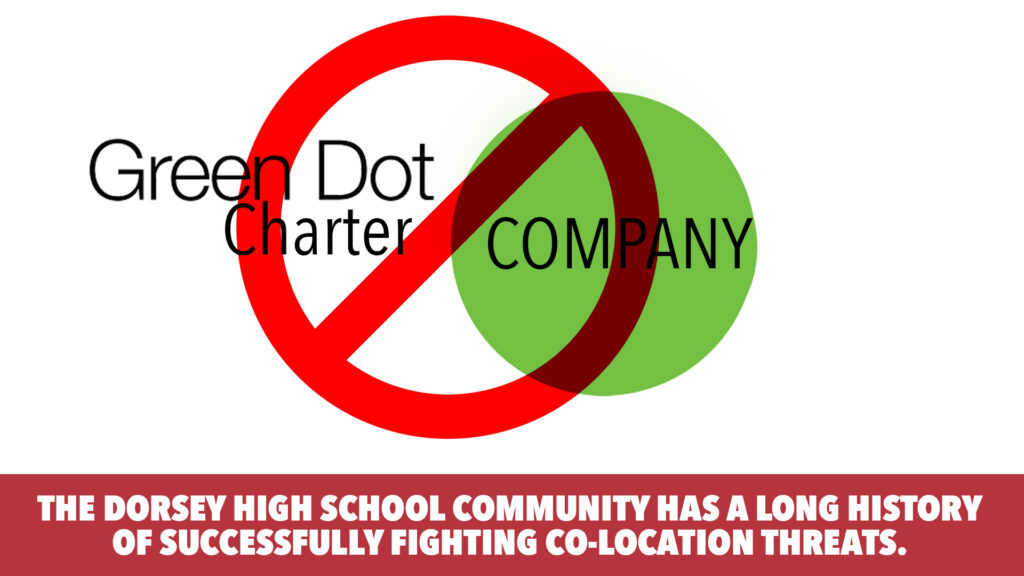 The Dorsey HS school community has a long history of successfully fighting co-location threats. Since the Public School Choice program first appeared at LAUSD, approximately ten years ago, they have faced and overcome a co-location threat almost every year. Their weapons? Organizing and community involvement at every step.

Dorsey’s latest success came earlier this year when, on April 1, the district made a written offer of 14 classroom spaces to Animo Westside, a Green Dot managed charter. In spite of the COVID19 shutdown, UTLA members at Dorsey quickly mobilized holding staff and parent meetings, emailing their school principal and Green Dot officials, and eventually joining a Green Dot Zoom meeting where they demanded that Green Dot decline the district’s offer and stay away from Dorsey HS.On April 17, Animo Westside withdrew their request for space at Dorsey HS.

The Dorsey community is overjoyed and celebrating another co-location victory. They are rightfully proud of their achievement but are not wasting time. They know co-location is harmful to everyone. It takes resources away from their students and undermines educators and parents’ job. They see co-location as a form of gentrification and a door leading to it.

As further insurance against future co-location threats, Dorsey’s educators are applying to become a community school to be able to bring students and families all the services they deserve and need. Let’s give the Dorsey HS educators and community a big shout for their inspiring victories over co-location. Let’s also learn from their success that, even under these extreme conditions, a community united and working together for the right cause will prevail.

What is co-location?
Under a flawed state law known as Prop. 39, neighborhood public schools can be forced to give away “unused” space to charter operators. In reality, that “unused” space is not unused at all—it houses arts and music classrooms, science centers, parent centers, and other resources that contribute to a rich, vibrant educational program. And just because a charter operator can co-locate does not mean that they have to. This invasion is a choice that charter operators make—a choice that hurts students in neighborhood public schools.

This divide-and-conquer strategy is pushed by the corporate lobby group California Charter Schools Association (CCSA). CCSA and local charter companies are funded by billionaire privatizers like the Walmart family, Eli Broad, and Reed Hastings and politically supported by Betsy DeVos and Donald Trump. Their agenda is to drain our schools of resources, say they are failing, and then privatize them. Privatization creates a two-tiered education system that does not benefit all students. Co-location is a threat to our children’s right to free and quality public education.